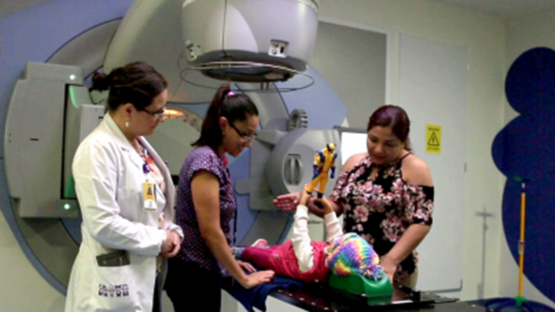 A survey conducted by the International Atomic Energy Agency (IAEA) reviewed radiation therapy services for treating cancers in children around the world. It identified differences in the availability of machinery and skilled workers, but also identified clinical practices that could help improve survival rates for low-income children in countries.

END_OF_DOCUMENT_TOKEN_TO_BE_REPLACED

A survey conducted by the International Atomic Energy Agency (IAEA) reviewed radiation therapy services for treating cancers in children around the world. It identified differences in the availability of machinery and skilled workers, but also identified clinical practices that could help improve survival rates for low-income children in countries.

Although rare, childhood cancer is the fourth most important cancer after lung, breast and colon cancer, as years of life can be lost. Many pediatric cancers respond well to treatment, and according to the World Health Organization (WHO), more than 80 percent of children in high-income countries are cured. In resource-poor countries, however, less than 20 percent of children survive because of late diagnosis, inaccessible or incomplete treatment, or because the cancer is linked to an existing condition such as malnutrition.

“It’s a big difference, especially since the vast majority of children are born in low- and middle-income countries,” said Kirsten Hopkins, IAEA radiation oncologist. “When combined with chemotherapy and surgery, radiation therapy is essential for around a third of childhood cancer patients,” she added. Radiation can be used to effectively treat brain tumors, bone and kidney tumors, and soft tissue sarcomas – a type of cancer that affects connective tissue such as muscles.

The study shows that the survival of children with cancer in high-income countries increased significantly from the 1970s onwards through the optimal use of early chemotherapy and Cobalt-60 radiation therapy machines. “It’s been a great medical success story in the last few decades, and it now needs to be extended to the place where the majority of children actually live,” said Hopkins.

While low-income countries often lack adequate radiation therapy to treat cancer in general, the study found that improved multidisciplinary clinical management and collaboration between health authorities, academic institutions, and international organizations could contribute to its use in pediatric oncology to improve.

In addition to the comprehensive survey, the study carefully reviewed the practices of eight leading treatment centers in middle-income countries and showed that “good pediatric radiation therapy is possible when these centers use modern approaches and radiation specialists work closely with other oncology and pediatric teams work”. said co-author Yavuz Anacak from the Radiation Oncology Department at Ege University Medical Faculty and Hospital in Izmir, Turkey. “This seems like a good partnering destination.”

The study also found that other infrastructures required for the best pediatric radiation therapy were inadequate or unavailable in many treatment centers around the world. This includes child-sized immobilization devices, anesthesia machines and post-anesthesia recovery rooms, play areas, and the availability of experienced childcare support staff such as nurses and social workers. Deficiencies were also noted in education as pediatric radiation therapy was not part of the curriculum in many countries and radiation oncology graduates had little or no experience treating children.

“Children are not just little adults, they are a whole group of their own,” said Hopkins. The quality of radiation therapy is of crucial importance, especially since children’s cells are more sensitive to radiation due to division and growth. This puts you at greater risk of late-night side effects that can affect learning and development.

Studies like this one, Hopkins added, offer a way to help countries tackle a growing burden of cancer, including in children. “We have identified gs and know where to focus beyond providing equipment, such as supporting training in multidisciplinary approaches to childhood cancer management.”

The IAEA assists countries in improving nuclear and radiation medicine, including through the provision of guidelines, equipment and training. The IAEA is part of the WHO Global Initiative on Childhood CancerThe company aims to ensure that 60 percent of children survive cancer by 2030 and has invested over 47 million euros in supporting radiation oncology services, including childhood cancer, since 2014. The agency is also developing guidelines to help health planners and low-income doctors ensure that safe and effective pediatric radiation therapy needs are reflected in cancer management and service planning.