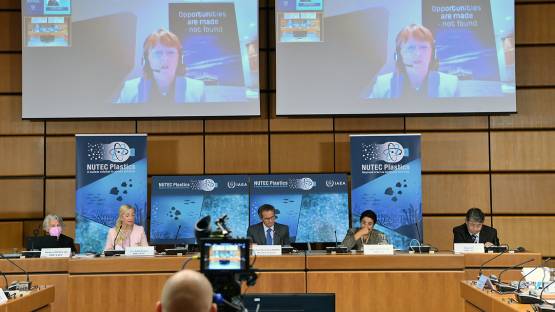 More than 40 current and planned IAEA projects support the activities of NUTEC Plastics. In Europe and Central Asia, some countries are participating in marine surveillance projects and / or carrying out technical and economic feasibility studies to set up pilot plants for recycling plastic waste using radiation technology.

END_OF_DOCUMENT_TOKEN_TO_BE_REPLACED

More than 40 current and planned IAEA projects support the activities of NUTEC Plastics. In Europe and Central Asia, some countries are participating in marine surveillance projects and / or carrying out technical and economic feasibility studies to set up pilot plants for recycling plastic waste using radiation technology.

The Institute of Nuclear Chemistry and Technology (INCT) in Poland is one of six IAEA collaborative centers for radiation technology. These specially designated centers assist the IAEA in promoting the peaceful uses of nuclear technology and assisting national efforts that Sustainable development goals (SDGs). In the panel discussion Andrzej Chmielewski, General Director of the INCT, spoke of the need for technically and economically feasible solutions. “It is very important that the agency set up a platform for cooperation between countries and different cooperation centers.”

The Institute for Marine Research (IMR) in Bergen, Norway is currently conducting projects with the IAEA Environment Laboratories in Monaco, which recently celebrated their 60th anniversary in addressing the challenges of the marine environment. The IAEA has worked with IMR to propose a global plastic pollution monitoring system that provides comprehensive, harmonized data for environmental, social and economic assessments. “We are looking for partnerships and international collaborations to understand observations in the field and in the laboratory,” said Michael Bank, Senior Scientist at IMR. “Plastic surveillance can support marine health initiatives, especially for countries that rely on fish for food security and economic stability.” Details of the proposed Global Plastic Observation System are in a published May Environmental science and technology Diary.

Mats Svensson, Director of the Department of Marine Management at the Swedish Department of Marine and Water Management (SwAM), shared how Sweden is actively supporting the marine litter reduction goals and developing regional monitoring measures, particularly for the Baltic Sea and the Northeast Atlantic. IAEA Director General Grossi recognized the ongoing efforts in the region and thanked Sweden for its 2 million Swedish kronor (around EUR 200,000) to NUTEC Plastics as part of its longstanding partnership with the IAEA to address global challenges.

In May, Sweden, along with Canada, Denmark, Finland, Iceland, Norway, Russia and the United States of America, officially presented the first action plan for the Arctic region to combat plastic pollution. “The Regional Action Plan addresses both marine and land-based activities and focuses on Arctic-specific sources and routes of marine litter that have an important role in demonstrating the efforts of Arctic states to reduce the negative effects of marine litter, including Microplastics will play a role in the arctic marine environment, ”said Halla Hrund Logadottir, Director General of the Icelandic National Energy Agency.

Cooperation with the private sector, Beyond plastic media (BeMed), an initiative of the Prince Albert II of Monaco Foundation, has created a business college – a collaborative space with multiple stakeholders. “Member companies work together with a panel of experts made up of NGOs and foundations to unite and support companies in the Mediterranean region in implementing specific solutions,” said Olivier Wenden, Vice President and CEO of the Foundation.

In Europe and Central Asia there are important policy instruments and programs as well as technical capacities for R&D. The IAEA is conducting a plastic waste management survey to establish a baseline that will help shape a future NUTEC technical cooperation project to meet countries’ needs. “We don’t want to reinvent the wheel. We want to be an effective partner who brings the desired results faster, happier and more effectively, ”said Grossi. “It is time to act.”

The previous round tables examined the plastic pollution situation in the other regions: Asia and the Pacific, North, Central and South America, and the Caribbean and Africa.